From Techniques to Traits

This lesson explores common biotechnology methods and their applications in agricultural sciences. Students will examine DNA analysis techniques, become familiar with the process of polymerase chain reaction (PCR), and evaluate methods of DNA analysis as they learn how the biological techniques can be used in the process of developing specific traits within a crop. Grades 9-12

biotechnology: the use of living systems and organisms to develop or modify products or processes

gel electrophoresis: a method for separation and analysis of macromolecules (DNA, RNA and proteins) and their fragments, based on their size and charge

gene: a unit of heredity that is transferred from a parent to offspring and is held to determine some characteristic of the offspring

genotype: the genetic makeup of an organism

phenotype: the set of observable characteristics of an organism resulting from the interaction of its genotype with the environment

polymerase chain reaction (PCR): a technique to make many copies of a specific DNA region in vitro (in a test tube rather than an organism)

recombinant DNA: joining together of DNA molecules from two different species that are inserted into a host organism to produce new genetic combinations

restriction enzyme: DNA-cutting enzymes that recognize one or a few target sequences and cuts DNA at or near those sequences

selective breeding: process by which humans control the breeding of plants or animals in order to exhibit or eliminate a particular characteristic

Humans have long been modifying crops to make them more useful. Today, corn is the largest cash crop produced by the United States.  It has an enormously wide variety of uses, including human food, animal feed, food preservation, adhesives, pharmaceutical production, and fuel production.4  But corn has not always looked like the corn we are familiar with, with large ears of neat, yellow kernels. Thousands of years ago, corn was growing as a much smaller grass known as teosinte. Thanks to selective breeding, modern corn has much larger, more numerous, and more nutritious kernels than its parent grass.5 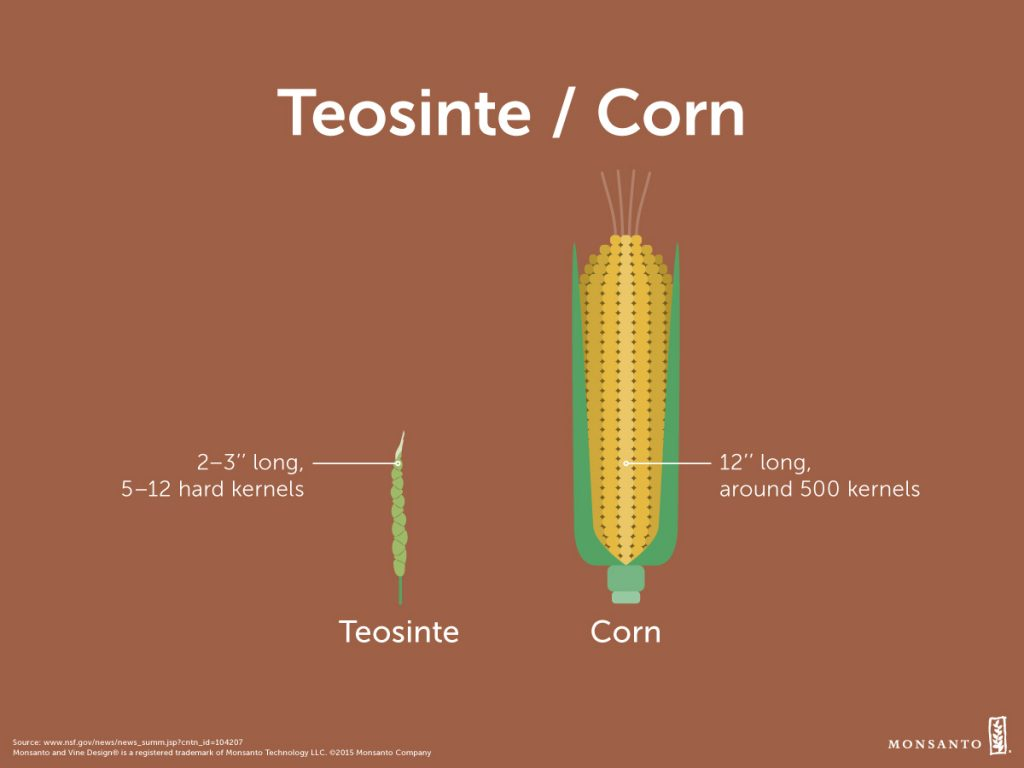 Since prehistory, humans have used selective breeding to improve crops by breeding together plants with desirable characteristics over many generations. However, until about 1900, genes and their relationship to traits were virtually unknown. Selective breeding was done based only on observable phenotypes, or characteristics. Today, scientists and plant breeders combine their knowledge of plant characteristics with information on plant genotypes, or genetics, to breed the best possible crops. By carefully choosing which plants to breed, they can develop crops that are more drought tolerant, insect resistant, herbicide tolerant, and more.

Scientists can even go a step further and insert desirable genes from other species into a plant’s genome (the plant’s DNA), conferring beneficial traits that would otherwise not occur. These new plants are a type of genetically modified organism. In 2012, 93% of soybeans and 88% of corn planted in the United States was genetically modified.6 The ability to genetically modify plants allows scientists to more quickly develop hardier, more nutritious crops that have an increased yield. Golden rice is a genetically modified rice crop that produces more beta-carotene (a vitamin A precursor) than white rice. The genes for this amplified beta-carotene production came from daffodils and bacteria. Roundup Ready® soybeans have a gene in their genome from a bacteria, making them resistant to the herbicide glyphosate. This allows them to be sprayed with the herbicide, killing the weeds around them and minimizing competition while leaving the soybeans unaffected.7 Bt corn contains a gene derived from bacteria that produces an enzyme deadly to an insect known as the European Corn Borer. This protects the corn from the insect, reduces the need to spray pesticides, and increases crop yield.8

In order for scientists and plant breeders to selectively breed the best possible crops, or develop a genetically modified crop, they rely on the ability to analyze the DNA of plants. A wide variety of biotechnology techniques can be used to help them do that.

Normally, the DNA of a plant is found in the nucleus of its cells. To analyze the DNA and identify genes that are beneficial to the crop, scientists must be able to get the DNA out of a plant’s cells. A technique known as DNA extraction is used to do this. DNA extraction uses various chemicals, including detergents and alcohol, to open a cell and separate the DNA from the rest of the cellular components. 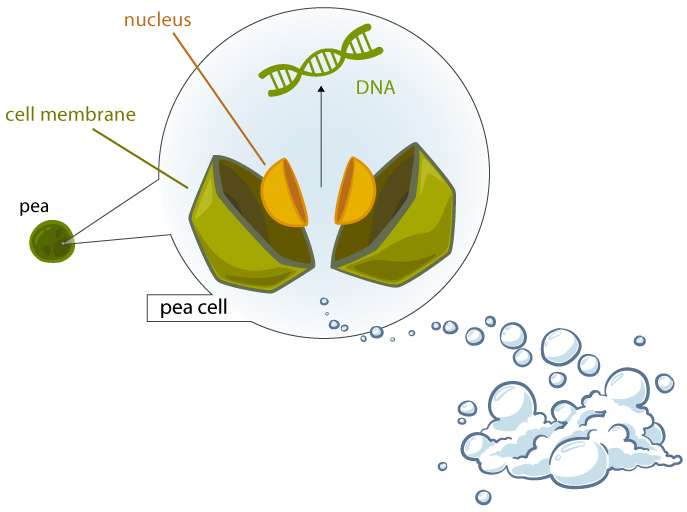 However, the amount of DNA extracted from the plant cells is often too small to work with easily. Scientists can make the DNA sample much larger by using a technique known as polymerase chain reaction (PCR). This technique mimics natural DNA replication in the cell, and makes many, many copies of the DNA. 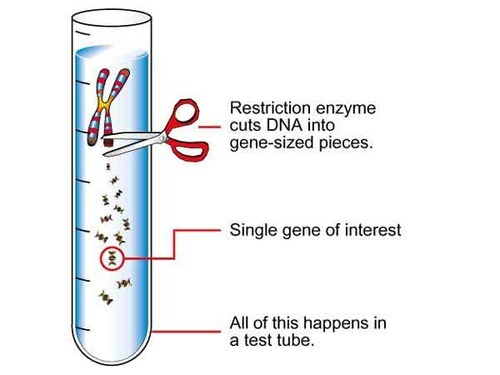 To quickly observe characteristics of a plant’s DNA and identify sequences that a scientist may be looking for, a technique known as gel electrophoresis can be used. Gel electrophoresis allows a scientist to separate molecules based on size. In this case, the plant DNA fragments that were formed when the DNA was cut with restriction enzymes can be separated from largest to smallest. This can be used to identify whether a particular gene or sequence is present in the plant’s genome.

All of these techniques may be used when identifying natural, beneficial genes, or when creating genetically modified crops using recombinant DNA. Recombinant DNA is formed when the DNA of more than one species are put together. This is the basis of the creation of genetically modified crops. A gene from one organism (for example, the gene from the bacterium Bacillus thuringiensis that produces a protein that is toxic to the European corn borer) can be combined with another (for example, the DNA of a corn plant), and a new plant can be grown with the Bt gene.

It is important to realize that each of these DNA analysis techniques is one tool a scientist can use in a long process of gene identification and manipulation. Each has a wide variety of applications, in agriscience as well as other areas. In this lesson, students will gain a general understanding of each technique and their role in DNA analysis, as well as how general DNA manipulation can be used to develop improved crops.

Alternative Approach: This activity can also be adapted to be completed in groups. Print one copy of the graphic organizer per group and challenge students to research each analysis method to complete the activity together. 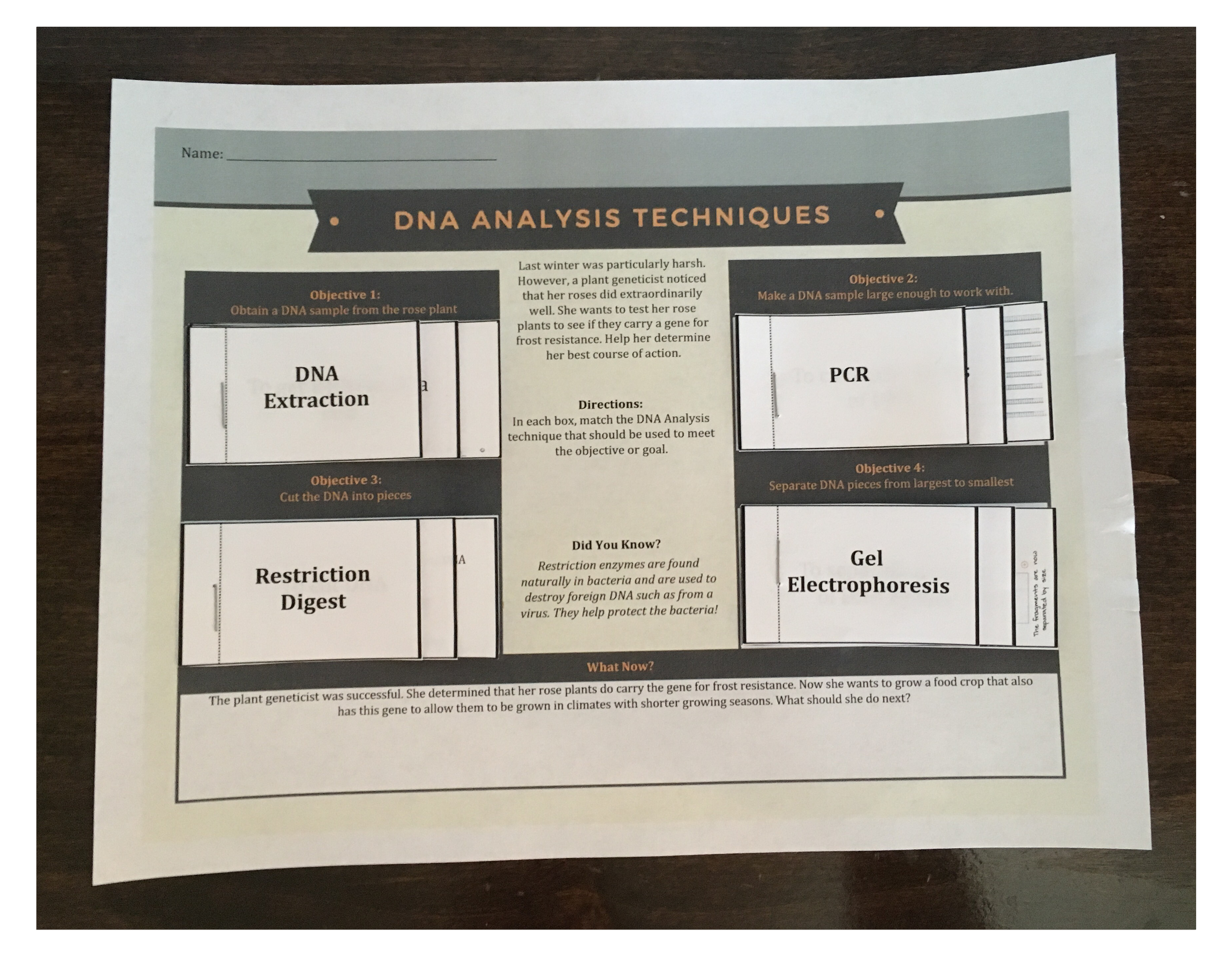 After conducting these activities, review and summarize the following key concepts:

CCSS.ELA-LITERACY.CCRA.R.7 Integrate and evaluate content presented in diverse media and formats, including visually and quantitatively, as well as in words.

CCSS.ELA-LITERACY.CCRA.W.1 Write arguments to support claims in an analysis of substantive topics or texts using valid reasoning and relevant and sufficient evidence.